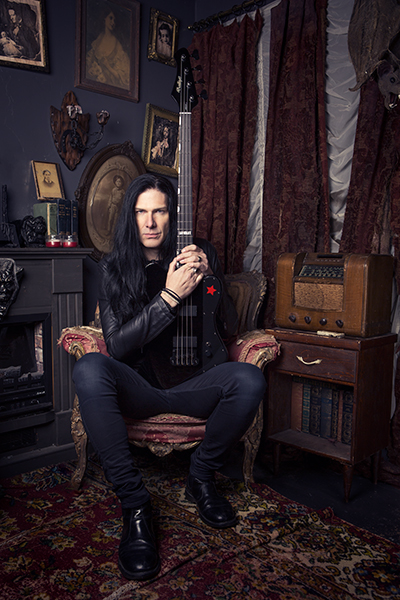 Todd ‘Dammit’ Kerns, is best known as bass player/backing vocalist of SLASH feat Myles Kennedy and The Conspirators. He is also the front man for legendary Canadian rock band Age Of Electric, and a multi-instrumentalist, singer, songwriter and producer. Basically Todd does it all and rarely, if ever, slows down. He is currently hard at work with Age of Electric, Todd Dammit And The Anti-Stars, TKO and a project called TOQUE which he formed with Cory Churko (Shania Twain, Kelly Clarkson, and Reba McEntire) and fellow Conspirator Brent Fitz.

The Signature Todd ‘DAMMIT’ Kerns Anti-Star is the culmination of R&D carried out on rock n roll stages all over the world, with bass guitars of all shapes and descriptions. The resulting design was a direct collaboration between Todd ‘DAMMIT’ Kerns and the Prestige Guitars design team and is an absolute embodiment of the tone and playing style Todd is known for. Straight ahead, full-force, rock n roll. The Anti-Star’s unique offset body shape features a 7 piece mahogany/walnut neck-through design coupled with ebony fingerboard and a Hipshot full contact bridge, to drive that huge, powerful, thunderous tone and maximize every ounce of string vibration. Tone controls are stripped down to the bare essentials; Volume control and On/Off kill switch. Pickups are Seymour Duncan Custom Shop Signature ‘Todd Kerns’ passive bass pickups, wound hotter than normal for a little extra punch. A reverse headstock with TUSQ XL Nut and a set of Grover Titan Machine Heads completes this rock n roll machine.

0
We use cookies to ensure that we give you the best experience on our website. If you continue to use this site we will assume that you are happy with it.Ok